Being a huge disney fan I couldn't resist seeing the film Brave which came out about a week ago here in england.

I don't want to spoil the film for anyone but i will say that it is an amazing film and that i do now officially have a new favourite disney princess.....Merida 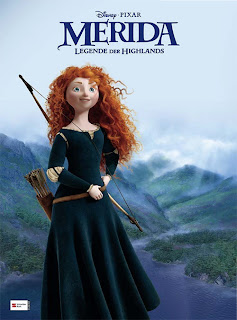 I am slightly baised as my grandparents are both scottish and therefore i can actually understand the scottish accent, which can be very difficult if you're not use to it!

But the moral of the film is one that is very heart-warming and has taught we that yes, it's good to have dreams and aspirations but also that my parents just want the best for me even if they appear to moaning or nagging.

Here is a couple of 'typically' scottish, as believed it are not they eat more than just haggis ;)1. Scotch broth- is a soup consisting of barley, carrots, turnip, swedes, leeks, kale with meat such as lamb, beef and chicken.

2. Mince and tatties- was my favourite dinner growing up, i loved my granny's mince and tatties with lots and lots of vegetables. Plus it's simple and basic

3. Scottish stovies (yumm)- basically it's a stew, containing potatoes and onions, with left over roast beef, corned beef or mince in a rich gravy sauce.

4. Skirlie or stuffing- oatmeal with melted butter and fried onion with seasonings thats then be put in the oven and baked. My sister loves this and can eat a whole bowl of it just of it's own or she mixes mashed potatoes in with it so it looks like cement!

5. Caramel shortbread- traditionally consists of three layers; a shortbread biscuit base, a caramel filling and a milk chocolate topping. 6.Edinburgh rock- it's hard to explain what it is, really but as a child i use to love it as its so sweet as it basically just sugar! probably not the best combination a young child and sugar!

7. Tablet- my granny's tablet is a massive hit at school. It's so addictive! Tablet is usually made from sugar, condensed milk, and butter, boiled to a soft-ball stage and allowed to crystallize.

8. Iru bru- The icon of scottish beverages. A bright orange fizzy drink, i can't really describe the flavour as i dont know what to put it into words.
.

9. Empire Biscuit- typically considered a traditional scottish snack. The typical Empire Biscuit has a layer of jam in between two biscuits. The top is covered with white icing, usually decorated with a glace cherry in the centre. In Scotland however empire biscuits are most commonly topped with a little sugared jelly sweet. My granny use to get as all a empire biscuit weekly, if we were good! 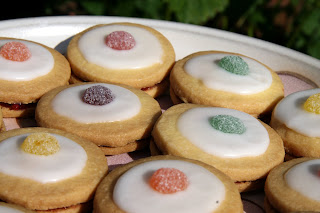 10. Tunnocks wafter- are the correct name, Tunnock's Milk Chocolate Coated Caramel Wafer Biscuit, is a bar consisting of 5 layers of wafer, interspered with 4 layers of caramel the whole bar is then coated in milk chocolate. Heaven!, i did actually have a tunnocks wafer today as a little treat!
The wrapper is partically rememberable.

i have promised myself i will blog everyday and take photo's of my meals and activities of the day.
Posted by Lucy at 13:31