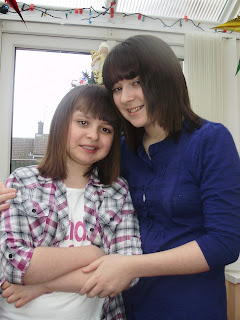 (see how my sister's eye's turn white with the flash of the camera)
At the age of 2 my beautiful baby sister was diagnosed with Dancing Eye Syndrome, being at only 4 at the time this meant little to me.


'What is dancing eye syndrome mum?' i could have been a millionaire if i was given a £1 for every time i asked my parents that question.

Since, then i have been interesting in the causes of such illnesses. My sister's diagnoses caused me questioning many things including my faith 'Why did God chose my sister, my parents- what have they done to deserve this'.

But then this leads to the following question, who does deserve to be ill?
the simply answer is no-one!

The condition mostly affects children, however adults can be affected also. In the UK 5-10 children a year are diagonosed with the syndrome

Typically, a previosuly well child, like my sister who was born perfectly 'normal' will become irritable and unsteady which in my sisters case was hard to identify as at the same time she had just begun walking. However the condition worsens over a just a couple of weeks or so, and the child becomes more miserable and then is  unable to walk. My sister also had a tumour in her stomach which may have made it harder for the doctors to diagnosed but i have to admit that she was let down by the doctors who kept on sending her away and telling my parents that it was nothing.

The cause of the condition is not known with certainty but it's thought to be an auto-immune condition in which antibodies which are normally directed to repelling infections and foreign material introduced into the body, start acting against the body itself.

In the case of DES it is believed that antibodies are directed against areas of the brain concerned with coordination and with personality and learning. In approximately 10 per cent of cases the condition develops as a complication of neuroblastoma, a tumour of childhood which is, in the majority of cases, self-curing. It has been suggested that it is the immune-based process of rejection of the tumour which acts indiscriminately on parts of the brain which are structurally similar to the tumour which is being destroyed. Despite exhaustive studies, there is no evidence that neuroblastoma is present in the majority of children with DES but it is thought that an immune-based process is present in all. Occasionally, viral infections seem to trigger the illness. A neuroblastoma was present in the case of my sister however she is just one case.

I do urge people to have a look at the website.http://www.dancingeyes.org.uk/index.html
Posted by Lucy at 11:29